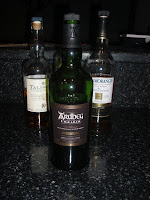 Overall Impressions: This is the real deal – Ardbeg has a reputation of being among the best of the best and it is deserved. This is an Islay whisky unlike most – it’s complex and subtle, more than just peat and smoke. Much more. When you drink Uigeadail you can understand why the old Gaelic translation of whisky (uisge beatha) is ‘water of life’ (yes, folks on the SFF blog, the ‘water of life’ is whisky, not worm juice). Though as I enjoy a glass on a warmish July evening I think that perhaps this is more of a cold weather drink. Of course is there a time that you shouldn’t drink the ‘water of life’?

I know I've been terrible at producing real content around here. All I can say is the job, plus travel, plus family (2 young kids), plus attempts at having a social life, plus a desire for at least 6 hours of sleep a night equals not much time for reading and/or blogging.

I'm enjoying The Urban Fantasy Anthology edited by Peter S. Beagle and Joe R. Lansdale (Book Depository, Powell's Books, Indiebound). I'm writing my review as I go - it will be long and probably as much an essay about urban fantasy as a review of the anthology. It'll be unlike any review that I've written before.

I don't usually jump on bandwagons around here (or at least I try not to), but I'm bored today and this sounds like a good idea to me. It turns out Pluto has a fourth moon that was just discovered. As yet, it has no name beyond the designation of P4. It seems that we are in the early stages of a viral movement to get the moon named after Neil Gaiman. Let's do it - spread the word and let's get Pluto's new moon named Gaiman.

This morning I was looking through Transworld's catalog for the rest of 2011 and they have Orb Sceptre Throne by Ian C. Esslemont (Book Depository, Powell's Books, Indiebound) slated for a December 8th, 2011 release (update - it now seems to be a January 12, 2012 release). They list the title as Orb Sceptre Throne (which surprises me because I find it kind of a silly and awkward title and expected it to change). So, fans of the Malazan world and it's greater story can rejoice. There is no cover art yet but they do have a synopsis (that is full of typos). I can't copy it, so I've transcribed it below (I try to preserve the typos in the transcription - there are lots):

The epic new chapter in the history of Malaz - the new epic fantasy from Steven Erikson's friend and co-creator of this extraordinary imagined world...

The tumult of great powers colliding has passed, leaving the city of Darujhistan and its good citizens to get one of their lives of politcking, bickering, trading and above all enjoying the good things it has to offer. However, this peace is illusory because of a treasure hunter, digging amongst the ancient burial grounds that surround the city, is about to uncover a hidden crypt, full of sealed vaults. Armed with magic-deadening otataral, he will open the last vault - the one no other dared touch - and in so doing will set free the most powerful and destructive of the Jaghut tyrant kings...

And fortune hunters are also at work far to the south of the Malaz. A fragment of Moon's Spawn, once the home of Aonmander Rake, Son of Darkness, crashed into the Rivan Sea and created a chain of small islands. Legends have already arisen around them, the most potent of which is that here is hidden the Throne of Night - claimed by some to be the seat of Dracoinus, ruler of Eternal Night, and by others to be the throne of Mother Dark herself. Either way, all who seek this ancient artifact - from magic-weilding mages and battle-scarred warriors to a Malazan army deserter called Grift - believe it will bestow unlimited power upon the eventual possessor. The stakes are high, greed is rife, betrayal inevitable and murder and chaos lie in wait...

When life and work get busy this series tends to get overlooked. So, it's a been a while. The picture below is of the Hoover Dam Bypass bridge that straddles the Arizona-Nevada border and Colorado River (it's about 800 feet above the river). Not only is a cool bit of engineering, but it's special to me because I did the geologic investigation for it's design. I spent about 6 months in the field for the project that included geologic mapping, rappelling, lots and lots of drilling, helicopter recon and more mundane things like providing traffic control for the drillers. It was a lot of hard and often very miserable work (temperatures in the summer routinely hit 135 in shade (57 C) and there was pretty much no shade to be had - the rock got hot enough to cause second degree burns to exposed skin. And now it's awesome to see the project completed. A couple of weeks ago (when the picture was taken) was my first trip back to that area since I last did field work on the project. It was a nice experience, in spite of it being 115 in the shade (46C).

The Great Ordeal is the name of a vast army under the command of the Aspect-Emperor and purported God of Gods, Anasûrimbor Kellhus. They march north to confront the forces of the No-God and forestall a coming apocalypse. The Great Ordeal is a collection of ancient enemies and allies with a greater number than any army in thousands of years. However the land they travel through is barren, lacking water and food. They are surrounded by enemies, the half-man, half-animal Sranc that have numbers far greater than they. They are constantly attacked – they are hungry, tired and thirsty. They are doomed and dying. It is The Great Ordeal.
Unfortunately, my reading of The White-Luck Warrior by R. Scott Bakker (The Book Depository, Powell’s Books, Indiebound) also felt like The Great Ordeal*. It was an effort to read from page one. I was starved for interest, I thirsted for understanding, and I was constantly harried by philosophical rantings through to the end. Frankly, even though I’ve raved about Bakker in the past and still consider myself a fan, I’m surprised that I finished this book.
The White-Luck Warrior is the second book of The Aspect-Emperor Trilogy and functions pretty much like you’d expect a middle book to. It takes the threads of the first book further, a lot of ground is covered (physically and philosophically), there is some cool action and a few pretty big reveals but nothing is really resolved and the book is left hanging on the cusp of something new. The Judging Eye (The Book Depository, Powell’s Books, Indiebound) was a book that figuratively and metaphorically looked backward in time – The White-Luck Warrior is most often too wrapped up in the present to worry on the past or future. Presumably the third book, tentatively titled The Unholy Consult, will look to the future.
In The Judging Eye Bakker set out to write a much more accessible book than those in The Prince of Nothing Trilogy – a book that could be enjoyed on a more surficial level without sacrificing the deeper, intellectual and philosophical journey. I felt that The Judging Eye was a huge success in this approach. So I was surprised and dismayed that Bakker chose to not write The White-Luck Warrior in the same style – there is almost nothing accessible about it. The style is dense, the language is very technical and philosophical and there is an over-reliance on referencing the history and long-dead peoples of the world (and their long, unpronounceable names). Generally this makes for a hard, slow slog of a read that can only be stomached in short doses and fails to create any connection between the reader and the book.
The lack of accessibility is made worse by the overwhelming negativity of the book. Sure, this is the second book of trilogy – there should be despair and a general lack of hope. But Bakker takes this several orders of magnitude further. I cannot and will not pretend to understand much of the philosophical underpinnings of Bakker’s writing, but I will say that it doesn’t present humanity in a positive light. In combination with a harsh, caste society under the thrall of Kellhus, it becomes downright unbearable. Even the few attempts at dark humor Bakker attempted in The Judging Eye are lacking, leaving nothing hopeful to grasp. I understand this is largely the point, but again, it makes for hard, uninspired reading.
If you take the time to read an interview with Bakker or (god help you) read his blog, then you’ll get an impression of Bakker being rather unsympathetic towards readers who do not take the time and mental effort to read into the philosophical underpinnings of his books. After all, that is the point of them. He is also well aware that the choices he makes in his writing style will largely be inaccessible. Considering these, I must admit that I don’t have the time or inclination to read as deeply into this book as necessary (and quite possibly not the intellectual acumen).
My family life and work life keep me so insanely busy that I only have short chunks to read in. And I’m usually both mentally and physically exhausted when it’s time to read. For me reading is a break – an escape. Yes, I read as a form of escapism. I’m not after pure pulp fiction, I generally like a good bit of meat with my fiction (as evidenced in my opinions of other books, including Bakker’s earlier work). But The White-Luck Warrior simply did not work for me, due both to Bakker’s choices in writing and my own situation. We didn’t fit. That’s a shame. I still believe that Bakker is one of the most important writers in the SFF field today, but with The White-Luck Warrior he has become even more of a niche that only the few will be able to enjoy.

*OK, perhaps my intro is harsh sounding and just a bit too clever and campy, but in the two months it took me to read this book I often referred to it in my head as The Great Ordeal and the slog of slogs (my typical time to read a book is 1-2 weeks, so 2 months was excruciating).
Posted by Neth at 7/06/2011 04:57:00 PM 11 comments:

I came home from a couple of day sof travel to find this waiting. Awesome! Though the truth is that I won't be reading it anytime soon as I decided many years ago to wait until the series is complete before reading any more (I've read the first 3). I simply don't have the time to do the re-reads necessary to stay sharp on this series before each new book with such a long interval in between releases. Though I'm not complaining - George, take as long as you need to do it right. I've got plenty of good books to keep me busy while I wait.
Posted by Neth at 7/01/2011 09:25:00 PM 6 comments: