Sometimes when a publisher sends me books they never arrive – and sometimes when a publisher sends me books I get double. Thanks to the latter, I have an extra copy of The Sacred Band by David Anthony Durham (Book Depository, Powell’s Books, Indiebound). This book finishes up the Acacia Trilogy in great fashion (read my full review) and I highly recommend this largely underrated series (my reviews of book 1 and book 2).

With the first two books in the Acacia Trilogy, Acacia and The Other Lands, David Anthony Durham has created a vast and engrossing canvas of a world in turmoil, where the surviving children of a royal dynasty are on a quest to realize their fates—and perhaps right ancient wrongs once and for all. As The Sacred Band begins, one of them, Queen Corinn, bestrides the world as a result of her mastery of spells found in the ancient Book of Elenet. Her younger brother, Dariel, has been sent on a perilous mis­sion to the Other Lands, while her sister, Mena, travels to the far north to confront an invasion of the feared race of the Auldek. Their separate trajectories will converge in a series of world-shaping, earth-shattering battles, all ren­dered with vividly imagined detail and in heroic scale.

David Anthony Durham concludes his tale of kingdoms in collision in an exciting fashion. His fictional world is at once realistic and fantastic, informed with an eloquent and dis­tinctively Shakespearean sensibility. (Read Chapter 1)

So, the giveaway is simple. Just send an email to nethspace ‘at’ gmail ‘dot’ com. Remove and replace the ‘at’ and ‘dot’ with the appropriate symbols or use the email link in the sidebar. Use the subject of ‘SACRED’. Include you're name and mailing address. The deadline is Friday, October 7th. Only one entry please and this is open to all. Good luck!

A Room With a View, an Update and a Bonus

Well, I'm back from Alaska and an very fun but very exhausting conference. I did actually see some Alaska, but mostly I was confined to a hotel in Anchorage. The red-eye back almost killed me (it didn't leave until about 2am). I did do some reading, but not much. I finished up The Edinburgh Dead by Brian Ruckley (Book Depository, Powell's Books, Indiebound), which I really enjoyed. I'll probably start up The Alloy of Law by Brandon Sanderson (Book Depository, Powell's Books, Indiebound) next, though I still haven't decided for sure. So hopefully I'll get some nice content up soon - and stay tuned, I think I've decided to do a giveaway with a book or two that I've received multiple copies of.

So, here is the view from my room in Anchorage, Alaska. 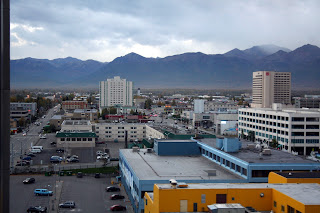 And for a bonus (not really), here is my view from a hotel room in Green Valley, Arizona from a trip just before the Alaska trip. 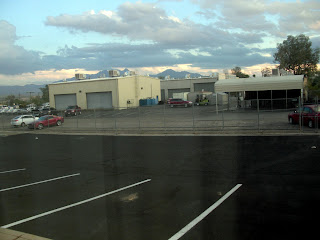 Email ThisBlogThis!Share to TwitterShare to FacebookShare to Pinterest
Labels: a room with a view, photos, update

I know I pretty well keep this a to book-focused blog, but then it is my blog and I do post about whatever interests me at the time. So, I'm excited that PHD (Piled High & Deeper), the popular webcomic about life graduate school, is going to be a full-length movie starring a few grad students from Caltec. Back when the comic first started I read it every day because I was essentially married to Celia (at least my wife repeated told me that she was Celia). Thankfully she graduated, finished up the post-doc, and has moved on to a non-academic research institution. And since that move I've stopped keeping up with the comic - but it remains a very insightful (and hilarious) view of the trials of graduate school. Anyway, the trailer is below and more info is available here and  here.

Email ThisBlogThis!Share to TwitterShare to FacebookShare to Pinterest
Labels: things of interest to me but probably not to you

Well, on Sunday I leave for Alaska, so don't expect any real content next week (perhaps a room with a view post, but probably not much more than that). So, in honor of my northern excursion...

The Sacred Band by David Anthony Durham (Book Depository, Powell’s Books, Indiebound) is the third and final book of the Acacia Trilogy. Durham’s ambitious trilogy takes the largely conservative genre of epic fantasy in a new direction of rather progressive thought and action and builds things up to a very fitting and satisfying conclusion.

As always with the third book in a series, any sort of description of plot is difficult as it would spoil any events in the earlier books and feel largely out of context to those not familiar with the books. So, I’ll just say that events in the second book are continued forward, destinies are realized, battles fought, mistakes atoned for, and poetic justice found as Durham neatly ends the trilogy.

Ultimately epic fantasy is traditionally a conservative genre, in spite of the recent trends to spice up the genre with grit and subversion. Generally, monarchies or other essentially authoritarian governments rule and even the good guys fight for such institutions. Good and evil is typically laid out in recognizable form (in spite of the shades of gray so often used). But I feel what makes epic fantasy most conservative is that it is typically infused with some form of nostalgia that looks backward in time rather than forward. It’s that nostalgic, backward look that brings the comfort to so many readers that generally seeking an entertaining escape. And I’m not condemning that, as it’s more or less the same goal I have in my own reading.

Durham blends his form of epic fantasy with the nostalgic backward look but infuses the societies of his world with our own world’s current and past issues in a much more realistic and applicable form than seen in typical epic fantasy. Nationalism, racism, drug addiction, slavery, corrupt government, outside interests controlling government affairs, the rich and elite immune to the troubles of the common person, etc. In Durham’s world the Acacia Kingdom (though really it’s more of an empire) rules by addicting its population to drugs to keep it pacified as children are sold into distant slavery. This leads its leaders into various ways of dealing with their guilt – drug addiction of their own, inspired yet unrealistic idealism, or corrupt certainty that they are only doing bad things because it’s what’s best for the people whether they know it or not.

The battles fought contain the full range of human motivation – greed, power, freedom, survival, etc. Yet it’s always clear who the good guys are and leaders actually learn from their mistakes and become better for it. True sacrifices are made. Justice is found. Inspired solutions reached. Peace found with understanding if not forgiveness. The ending is idealistic – the good guys win, though not necessarily survive. Hope for the future is real. Systemic societal problems actually seem to be solved. I think many may complain that the ending is too neat and pretty, too unrealistic. But I think this is the point – Durham wants to show what a progressive message in epic fantasy can look like. Not the conservative, nostalgic end so common and not a cynical response to that conservatism. He presents a truly progressive move forward rather than backward or a simple reestablishment of a status quo. A vision of hope that could translate into our own lives and society, though obviously the series is still limited to ultimately less complicated depictions that don’t show details on how things actually move forward.

Durham’s writing style initially took some getting used to in the first book, but in The Sacred Band seems to flow freely – either his writing has gotten a bit more accessible through time, I have adjusted to his style, or most likely, a bit of both. One strategy Durham employs is to end seemingly every chapter on a bit of a cliffhanger. I find this both frustrating and rewarding. It gets a bit annoying that nearly every chapter ends with a cliffhanger only to move onto a completely different part of the world. However it also keeps the tension high throughout the book and invited me to be even more invested in the book.

Durham walks a very delicate balance with the number of points-of-view he presents. He verges on having too many and loosing the necessary focus of the book. Yet he has enough that a wide variety of events are seen and experienced by the reader. The balance he achieves is probably about as good as one could expect.

All in all, The Sacred Band and the Acacia Trilogy as a whole is a wonderful breath of fresh air. It has all the cool sense of wonder that great fantasy can have – unique and weird animals, dragons (of a sort), magic, mad sorcerers, a corrupt powerful queen, an idealistic prince, a warrior princess, and a dashing brigand. Each deals with their place in realistic ways that serve to transcend the cliché. And the action and setting are just what fantasy fans look for. It’s a really well put together work and a satisfying conclusion to an often underrated trilogy.

Durham’s foray into fantasy ends successfully. And it leaves me craving for more. Durham has said that for now he wants to move on to the next thing in writing – back to historic fiction and perhaps some more literary fiction. I can only hope he comes back to the SFF world again with another breath of fresh air.

Room With A View - San Diego

So, I'm in San Diego for a conference. It's a nice hotel right on the waterfront. All the rooms have balconies. I had high expectations of lovely view of the bay and nice balcony to enjoy it from. This is what I have... 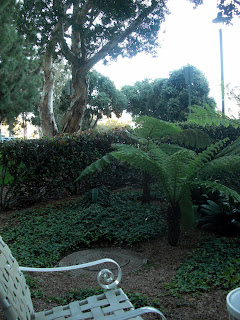 I suppose the garden is better than the parking lot it's blocking out, but still - first floor? The lobby is even higher than this. And do you see the manhole? Yep, that's for the sewer. When the air is still I get a lovely odor of sewer gas while sitting on the porch. I guess that's what you get with the relatively cheap conference room rate I have. Oh, and there isn't any decent food nearby for a reasonable price.

Email ThisBlogThis!Share to TwitterShare to FacebookShare to Pinterest
Labels: a room with a view, photos

Books Received and an Update

Update first - actual interesting content will continue to be sparse around here for quite a while. Life has me as busy as ever and with the AZ Diamondbacks in a penant race, my reading time is as short as ever. I'll also be travelling for half the month of September (4 days in San Diego and 9 days in Alaska). So, be patient and I'll see if I can come up with anything of actual interest. Anyway, now to the books received since August 12th.