Leviathan Wakes by James S.A. Corey (Book Depository, Powell’s Books, Indiebound) is a pulp-ish space opera occurring just prior to humanity’s expansion beyond our solar system and any contact with extraterrestrial life. Earth and Mars are the big military powers while settlers in the asteroid belt and beyond (known as belters) are a sort of second-class of humanity with revolutionary aspirations. War breaks out as harried captain of a diminished cargo crew (Holden) and a down-on-his luck detective from the asteroid Ceres (Miller) find themselves at the center of something bigger than the escalating war around them.

James S.A. Corey is the pen name for the writing duo of Ty Franck and Daniel Abraham – with Abraham being a something of a darling for on-line critics and reviewers with a wide variety of works on the market and Ty Franck best known as George RR Martin’s assistant. With that, Leviathan Wakes has been widely reviewed with relatively high praise. I’m not quite as high on it as others, though it is certainly a good, fun read that combines classic space opera with a more modern sensibility (if vomit zombies are sensible that is J).

Leviathan Wakes is not hard SF, but it does feel for the most part like a reasonable possibility. Humanity and its flaws don’t change, they just change location. However the feel of the society at times rubbed me the wrong way – it feels like things are now. I find it hard to believe that society would seem so similar, in spite of few things clearly inserted to try and make things feel advanced – such as the family of Holden, which is a family of multiple ‘parents’ living together in a sort of communal setting and raising a single child (this is also pretty much the only family structure mentioned in the book).

Of course the most topical aspect of the book that you’ll either love or hate are the zombies. Yes, there are indeed space zombies in Leviathan Wakes – or as the they say in the book, vomit zombies. It’s not a cheesy as I make it sound and it’s actually rather interesting, however for some insane reason I couldn’t help but think of ‘space herpes’ from the 1980s SF movie, The Ice Pirates – which really has no resemblance, but that’s how my mind rolls. But there is quite a memorable scene as Holden and Miller flee from legions of vomit zombies while suffering the effects of acute radiation poisoning.

In my opinion what is more interesting and much more successful are the political and personal interplay between various characters and factions. The trust, lack of trust, bad judgment, idealism, obsessive devotion and conflicted loyalty show the flawed human spirit in action.

In short, Leviathan Wakes is a fun new space opera and the opening book in a series called The Expanse and yet another example that SF is not dead, nor will it be anytime soon. As with many others, I’m eagerly awaiting the publication of Caliban’s War, due out in June, 2012 (Book Depository, Powell’s Books, Indiebound).
Posted by Neth at 12/30/2011 10:36:00 AM 6 comments:

I hope all have had and are having a wonderful holiday break (or at least not a terrible one). It's been quite around here for the usual reasons - family, work, etc. It'll continue to be quite since I've got a fair amount of travel coming and a huge deadline at work, though I do hope to get a few things tied up around here before the year ends. I still owe reviews for Leviathan Wakes by James S.A. Corey (Book Depository, Powell's Books, Indiebound) and Blackdog by K.V. Johansen (Book Depository, Powell's Books, Indiebound). Leviathan Wakes will probably be a mini-review since it's seen so much coverage and I'm a couple months late on it anyway. I also should get up the standard 'Year of ...' post in the next couple of weeks. Anyway, even though I'm quite busy I do hope to get to a more regular blogging schedule over the next month or so.

And now for something completely different....

The week prior to Christmas I was in Cedar City, Utah doing some work on a big landslide that has shut down a state highway for several months. This photo is a nice view we had on a very cold afternoon - note that trees on landslides often aren't exactly vertical.

The Hive Mind Recommended Me Some Books for a Christmas Gift

Last week I asked of the hive mind of my Twitter followers for a book recommendation - not for myself, but for my cousin for her Christmas gift (technically I suppose she's my second cousin). She is an 11-year old girl who is an avid reader, particularly of fantasy. She even has a review blog (not linked because I don't want gift to be spoiled :) ). So, obviously the usual suspects won't do so well. And I imagine she's a bit under-read on the older books since she gets lots of books from her aunt who was a long-time manager at an indie bookstore.

Anyway, the recommendations that came from Twitter are below. Any other suggestions are welcome in the comments of course.

I've made no decisions yet, but thanks again to all those who provide recs.

Email ThisBlogThis!Share to TwitterShare to FacebookShare to Pinterest
Labels: books, recommendations, YA

Helping Those in Need – Genre-Style 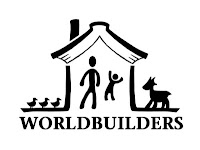 So, it’s that time of year when it’s all about getting stuff for you or others – or essentially spending money. But there are plenty of opportunities to put your money to a more charitable use, and various places around the world of SFF authors and bloggers can help you do just that. So, this post rounds up a few charitable enterprises around the SFF blogosphere. Please consider giving if you are able.

Patrick Rothfuss and Worldbuilders: This has become an annual tradition where Patrick Rothfuss sponsors a campaign to gain donations for Heifer International, an established charity that provides sustainable food for parts of the world that really need it. Last year the campaign raised over $190,000! The bonus – authors, publishers and various others have generously donated hundreds (perhaps even thousands) of items that can be won. Other items can be purchased (with the funds going to the cause) and there are auctions for some really special products/services. It’s a great cause that I happily contribute to every year now.

Pat’s Fantasy Hotlist for Breast Cancer: Pat has done quite a bit over the past few years to raise money for breast cancer, and this year is no different. It’s not quite as glamourous as what Patrick Rothfuss does, but it’s still a great cause.

Terri Windling Benefit: Author/editor Terri Windling has come across some hard times and a lot of her friends and colleagues have teamed up to raise money to help her out. There are lots of books and other stuff that can be bought for the benefit.