Whispers Underground is the third book in the Peter Grant urban fantasy series by Ben Aaronovitch (Indiebound, Book Depository, Amazon). These books have essentially become must-reads for me for a variety of reasons – they are short, they are fun, they are well-written, and they offer more than just the standard urban fantasy template, particularly with the police procedural aspect thrown in. And I suppose that being set in London is another big plus since it’s a city both foreign and familiar to me that I find immensely interesting.


First – ignore the description on the back cover of the book. It’s one of the worst I’ve ever read – it does not in any way reflect actual events and feelings in the book. Yes, there is an American FBI agent and yes she seems to be a conservative Christian. However, that is a tiny tangent and not really much of an issue at all – in fact, she’s rather likeable and I wish the synopsis had not made me predisposed to disliking her. It’s really unfortunate that the publishers did such a disservice to the book with this synopsis.
In Whispers Underground Peter is called to investigate the murder of an American art student and the son of a US Senator. The murder takes place in a subway tunnel, which of course leads Peter deep into the Underground, often guided by a particularly untrustworthy informant. The murder plot itself is not terribly interesting and the eventual solution is a bit unconvincing. However, the strength of Aaronovitch’s writing is more in the police procedure and the interlacing of the supernatural with the reality we all think we know as told from the point of view of a well-created and out-right interesting main character. In many ways the murder simply doesn’t matter as the main investigation and a few tangents further real the reality of Aaronovitch’s London.
Whispers Underground continues in the direction that Aaronovitch has set for the series – it may be focused around a single investigation, but further groundwork is laid for growth of the Folly (the team of ‘supernatural’ investigators), for future confrontation with a particularly nasty bad guy, growth of Peter and Leslie’s (potential?) relationship, and more hints of the wider world of magic.
In short, Whispers Underground is another great installment in the Peter Grant series. It may not be the greatest of the series, but it’s more than good enough to keep me coming back for more.
And on a separate point, I’m quite happy that Del Rey has finally decided to abandon the white-washed covers of the first two books.

I remember a time not so long ago when it seemed every (epic) fantasy book out there was set in some medieval Western European analog, particularly a British analog (presumably because they speak English there, though the notion of what languages were actually spoken and sounded like in medieval Britain is probably not well appreciated, but I digress). The trend over the last year or two has been to reverse the Euro-centric focus of the past with most new (epic) fantasies inspired at least in part by non-western cultures. I love this positive evolving of the genre, though I must say that the novelty of it has worn off a bit with its popularity.
Range of Ghosts by Elizabeth Bear (Indiebound, Book Depository, Amazon) follows this new trend with inspiration from the Asian steppes, Mongol hordes, mountain Buddhists and desert caliphates. Of course there’s magic, an interesting set of very real gods that literally change the sky above, and a quest. Range of Ghosts shows Bear executing at her best – the economy and ease with which she unveils the story shows a mastery of her craft.
Range of Ghosts centers on Temur, a prince of a great empire of the steppes. One of his uncles aims to take over the empire, with the typical slaughter and great battles that ensue. Temur escapes and flees to a mountain empire to the south where he finds himself on a quest of survival, rescue and vengeance in the company of some interesting and not all human companions.
The economy with which Bear writes Range of Ghosts stands out as one of the biggest triumphs of the book. It’s an epic fantasy, the opening of the Eternal Sky trilogy, and it’s only 334 pages long. It’s not that the book is without depth, or that the characters are lacking development, or that the world is not built well enough. It’s simply that no word, no sentence, no paragraph is wasted. And the language flows almost poetically, harkening back to an earlier time in epic fantasy and the likes of Le Guin and McKillip. The near-poetic style of writing helps to set the tone of the setting and culture, completing the otherworldly feel that the best of fantasy can achieve.
However, for all the beautiful economy of the language, I found it a bit challenging to become fully engaged in the book and its characters at first. While I won’t say I was disinterested, I didn’t care as much as I should have for the first third of the book or so. I can’t fully explain why this was, but it was a bit of a hindrance to me fully engaging with the story and its characters. I suspect that it’s mostly due to the necessary set-up of an opening book in a new world and something on an unconvincing opening romance (though I really like the direction this appears to be going by the end of the book).
But, once the set-up is complete, the pace really gets going. The interplay between the characters is well presented – their depth, conflict, uncertainty, confidence, even arrogance is very nearly priceless. And there’s just enough humor interlaced with the tense, dangerous, and even tragic moments to bring things to life.
Elizabeth Bear is one of those authors that should be talked about more in the circles I populate. She is one of the most prolific SFF authors of the last decade, with a huge range in her story telling. I’ve read a bit here and there, though I’ve always planned to read more (as one would guess from the number of her books that rest on The Stack of books to be read). I’ve seen it said that Range of Ghosts is her best yet – I don’t feel I’ve read enough of her books to comment there – but it is good, quite good and it should be getting more buzz than it has. 2012 is turning out to be a very good year for the fantasy genre, a year that shows it’s grown up a bit, seen the world and realized that there is way more to it than medieval Britain. Bear belongs at the forefront of this discussion. But perhaps the best thing I can say about Range of Ghosts is this: I really, really want to read the sequel, The Shattered Pillars (Indiebound, Book Depository, Amazon). Like now*. And so should you.
*I suppose I could read one of the companion novellas, such as Bone and Jewel Creatures (Indiebound, Book Depository, Amazon).
Posted by Neth at 9/12/2012 04:58:00 PM 6 comments: 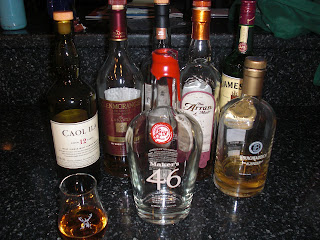 Style/Region: Kentucky
Age: -
Barrel: Barrel Finished with Oak Staves
Alcohol: 47%
Water added: No
Nose: Sweet with a thick caramel smell and hints of honey and oak.
Mouth Feel: Thick, velvet and smooth.
Flavor: Smooth and sweet. Flavors of caramel, honey and oak with hints of malt.
Finish: Lingering smooth sweetness with oak.
Overall Impressions: Overall a bit harsher than my usual scotch. The malty/caramel flavors are thicker, heavier and sweeter. A very nice drink. It’s well balanced and quite a big step up from the run-of-the-mill bourbon and a nice change in pace from my typical evening dram.
Posted by Neth at 9/07/2012 08:00:00 PM No comments:

So, I spend a good chunk of my holiday weekend organizing my books and doing a major cull - and you'll see in the photo below that it's an on-going battle for me. But a good one. Anyway, a big goal this weekend is for me to get at least one (and hopefully more than one) review written and posted. Otherwise I may bump up against a big trip and it'll be many more weeks. Range of Ghosts by Elizabeth Bear (Indiebound, Book Depository, Amazon) is my number one priority in that. But I also owe reviews for Whispers Underground by Ben Aaronovitch (Indiebound, Book Depository, Amazon) and Dancing with Bears by Michael Swanwick (Indiebound, Book Depository, Amazon). I may also do a short write-up about Two Ravens and One Crow - a novella by Kevin Hearne (Amazon), but for that it's really just more of the same, so there's not too much to say (which is to say it was a fun novella to read).
And so far, I have to admit that I'm quite happy with my purchase of a Nook SimpleTouch. I like the e-ink and I like having it seperate from other electronic media - I can still feel like I'm 'urling up with a good book rather than sharing the bed with books, email, youtube and all the other electronic distractoins that come with a tablet. And i'm finding that navigating the world of different formats and DRM isn't so challening with the help of Calibre and a few helpful plug-ins. But it would sure be easier if publishers and e-reader/tablet providers would wise-up and use a common format that is DRM-free.
Anyway, on to the books received:
Posted by Neth at 9/07/2012 02:13:00 PM No comments:

So, because I actually need to access my home office (and because I value my marraige) I spent the holiday weekend organizing all my books, mostly to get rid of as many as possible. The 2 photos below should make the problem clear. 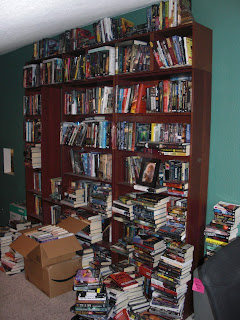 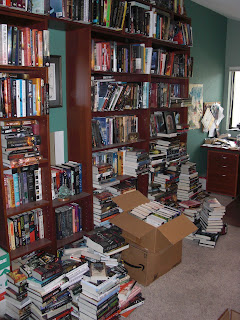 After a few hours of work I was this far (the piles are actually organized - trust me): 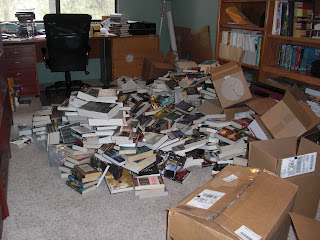 After a bit longer (still orgainzied, just lest distinguishable. My son launched a great expedition to climb Mount TBR): 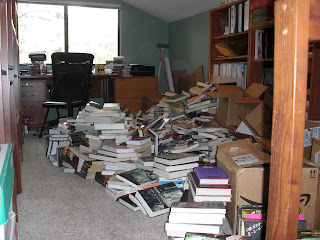 And finally, I dicovered that I do actually have bookshelves back there. 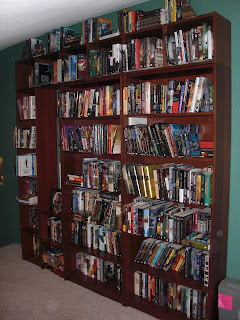 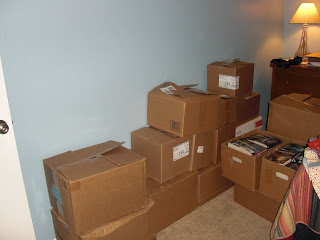 They are on there way to a combination of a local used bookstore and the library (though I imagine quite a few will find their way into the recycling system). I'm exhausted, but it's nice to have my office back. Any bets on how long it'll take before I'm drowning again?
Posted by Neth at 9/03/2012 08:56:00 PM 11 comments:

Email ThisBlogThis!Share to TwitterShare to FacebookShare to Pinterest
Labels: things of interest to me but probably not to you
Newer Posts Older Posts Home
Subscribe to: Posts (Atom)