Giveaway: 10th Anniversary Edition of Gardens of the Moon by Steven Erikson 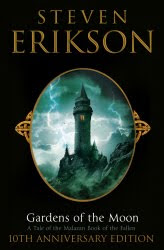 I’ve got 5 copies of the 10th Anniversary Edition of Gardens of the Moon by Steven Erikson (US, UK, Canada, Indiebound) to giveaway courtesy of Transworld. This sounds like a great edition for fans and is the first hardback edition of GotM in the UK.

It’s been an astounding 10 years since the first Malazan title, Gardens of the Moon was published in the UK. To celebrate this we are releasing a special edition hardback of the title and I have a handful of these available for competition prizes for you to giveaway on your sites or in your magazines. This is the first ever UK hardback edition of the book and it includes a special foreword from Steven Erikson. Erikson’s Malazan Book of the Fallen has established itself as one of the most celebrated and acclaimed works of epic fantasy in the new Millennium.

Erikson is an extraordinary writer...my advice to anyone who might listen to me is: treat yourself to Gardens of the Moon.
STEPHEN R. DONALDSON

Bled dry by interminable warfare, infighting and bloody confrontations with Anomander Rake, Son of Darkness, the Malazan Empire simmers with discontent. Its legions yearn
for some respite from the chaos and killing.

For Sergeant Whiskeyjack and his Bridgeburners, and Tattersail - the lone surviving sorceress of the Second Legion - the aftermath of the siege of Pale should have been a time to draw breath and mourn the dead. But Empress Laseen's gaze has moved on and fallen upon the ancient citadel of Darujhistan. The last of the Free Cities of Genabackis, it proclaims its defiance and still holds out against her. However the empire is not alone in this great and bloody game. Sinister forces are gathering, and it would seem that the gods themselves are preparing to play their hand...

Gardens of the Moon is the defining opening chapter in what has been hailed a landmark of epic fantasy - Steven Erikson's awesome, multi-volume sequence, 'The Malazan Book of the Fallen'.

Rare is the writer who so fluidly combines a sense of mythic power and depth of world, with fully realized characters and thrilling action, but Steven Erikson manages it spectacularly.
MICHAEL A STACKPOLE

A world that is both absorbing on a human level and full of magical sublimity...a wonderfully grand conception...splendidly written...fiendishly readable.
ADAM ROBERTS

I stand slack-jawed in awe of The Malazan Book of the Fallen. This masterwork of the imagination may be the high watermark of epic fantasy.
GLEN COOK

Erikson's strengths are his grown up characters and his ability to create a world every bit as intricate and messy as our own.
J. V. JONES

Entry is easy – just send me an email at nethspace [at] gmail [dot] com. Remove the anti-spam measures as appropriate or use the handy link in the sidebar. Include GARDENS as the email subject and make sure to include your full mailing address. Only one entry per person and this contest is open to anyone. The contest is open for 2 weeks – so make sure you enter by November 17th.
Posted by Neth at 11/03/2009 09:21:00 AM

Email ThisBlogThis!Share to TwitterShare to FacebookShare to Pinterest
Labels: contest, Gardens of the Moon, giveaway, Malazan, Malazan Book of the Fallen, Steven Erikson

I'm a big fan of Malazan books, currently reading the Memories of Ice. I'd love to get a copy of the 10th Anniversary Edition of Gardens of the Moon. ;)

I have the SubPress numbered version of GOTM but that's more for pure droolness than anything, I came into the series just before RG was published so have most of the series in PB & TPB. To get them all in HC would be awesome. Just wondering if it's worth my money to get them in the SubPress as well as the 10th anniversary editions as I am a collector at heart and having both editions would be great.

Have the pulishers confirmed that they are, without a doubt, doing the entire 10 books in the new hardcover? And will the design stay the same or will they switch it half way again? The only reason I'd get the 10th Anniversary edition would be if they could guarantee both those things - and I realise that's a tall order as they can't predict how well sales will go at all...

Heh, bookdepository is listing it as 50 pounds! Bugger that for a laugh!

Are they going to do all 10 books in hardcover? It would be nice to round out the bookshelf!