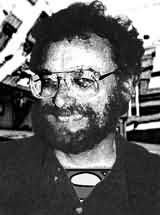 Michael Swanwick Answers Questions Five
Since coming on to the scene in 1980, Michael Swanwick has been one of the most acclaimed SFF writers that no one is talking about (at least it seems so these days). He has been nominated for and won almost every major award of his field, including the Nebula, Hugo, Theodore Sturgeon, and World Fantasy Awards. He’s written everything from hard science fiction to high fantasy, often playing with the common tropes of SFF in interesting ways. His books include The Iron Dragon’s Daughter (1993), Jack Faust (1997), and Bones of the Earth (2002) and several short fiction collections. The Dragons of Babel (my review) is his newest novel and one that I cannot recommend enough.


The people of Philadelphia have a reputation for displaying quite a bit of vitriol when it comes to sporting events. How has this impacted your life and writing?

MS: People from elsewhere mistake Philadelphian intensity for hostility, when all we’re doing is just busting your chops. The other day when I was buying milk at the corner store, an old man in line ahead of me painfully negotiated a couple of bills from his wallet and said, “I tell ya, it’s hell being old.” The young guy behind the counter looked at him said, “I wouldn’t know. I ain’t never been old.” Anywhere else in the country, that would have been rude. Here, it’s just a less trite way of saying, “Having a nice day.”

I like to think that living in Philadelphia helps keeps me in touch with reality. When you’re writing a fantasy novel, you really need that, to prevent your fiction from losing its grip and floating away.

What type of protection do you recommend for genre promiscuity?

MS: If by that you mean mingling and confusing genres, then none whatsoever. Let a thousand bastard genres bloom! Everybody loves a baby. But if you’re talking about promiscuity within works of genre, I do not agree with those who claim to approve of sex scenes only when they’re necessary to the plot, rather than gratuitous. Personally, I like gratuitous sex. And I believe it has a place in fiction as well.

If The Dragons of Babel were a fortune cookie, what would its fortune be?

MS: “You are the rightful King of Babylon. Too bad you were kidnapped as a baby.”

How would you interpret this fortune if were your own?

MS: I’d look on it as good news. Have you ever noticed that everything that fantasy tells you is something good is actually something bad? The king is restored to his throne and we’re supposed to cheer. As an American, I can’t identify with that. Patriots shed their blood to free us from a foreign despot, and we’re expected to be okay with some twit of a descendant reasserting power over us?

In my earlier novel, The Iron Dragon’s Daughter, the protagonist, Jane, winds up as a chemist in Pittsburgh. This really grinched a lot of stone fantasy fans, who were unhappy that she didn’t end up as Queen of Everything. But she got to be a chemist – in Pittsburgh! Pittsburgh is a great city, and chemists are interesting people with jobs they love. Any genre that expects you to sneer at that has something wrong with it.

Why should The Dragons of Babel be the next book that everyone reads?

MS: It’s been getting rave reviews from all the critics, so I’d like to learn what real people think of it. And it’s got something that people don’t expect from me – a happy ending. My wife, Marianne, was reading the book as I wrote it, and one chapter from the end, she said, “This doesn’t end well, does it?”

“It won’t end well for Alcyone.”

“Yes, it will! There’s a happy ending for everybody.”

Great interview. I'm definitely going to pick up his books. And I agree, Pittsburgh is a great city! :)

Excellent interview (and review)! His books are just begging me to read them :)