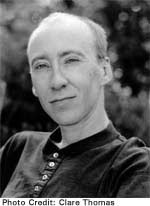 Steven Erikson Answers Questions Five
Steven Erikson leaped on to the epic fantasy scene a few years ago with his debut fantasy novel, Gardens of the Moon, the beginning of an ambitious 10-book series: The Malazan Book of the Fallen. It’s often a case of love them or hate ‘em when it comes to his books, but he has a rabid fan base that I count myself a part of. Publishing the books at rate of about 1 book a year, 7 of the 10 are already published with Toll the Hounds due out later this year. And, in my opinion, his shorter fiction is even better.

I am pleased welcome Steven Erikson to Questions 5.

What is the perfect cup of coffee for writing your books? Do ever need something a bit more…leaded?

SE: I’m pretty consistent with a skinny latte, two shots, no foam (crazy that I need to specify no foam, since if I wanted foam I’d ask for a cappuccino, wouldn’t I?). As for ‘more leaded,’ no, barring the occasional shot of industrial flame retardant and a spritzer of malathion.

How is said cup of coffee (and/or leaded beverage) reflected in your writing?

SE: As far as I can tell, it isn’t. Coffee exists to sustain detectable life signs in what would otherwise be a clinically dead writer (in this case, anyway). Coffee’s reflection on my writing is evinced in that I am actually writing. Without it, a vast ominous silence would ensue.

Far into the future, the equivalent of an archaeologist from a significantly advanced culture (not necessarily a human culture) unearths a set of The Malazan Book of the Fallen. What theories about us might they come up with?

SE: Well, having been an archaeologist, you’d think I’d have a glib answer for this one. I don’t. There’d probably be a huge debate over the veracity of the ‘history’ as I’ve written it, inasmuch as say, people still argue Homer (bronze age/iron age, gods and goddesses, etc), so will people one day argue the cultural specificity of revered religious icons in holy sites like Hollywood, as well as those wearing ceremonial headgear (baseball caps, football helmets, etc). Anyway, a lot depends on how much other stuff survived, and whether or not the next species has a different concept of physics that might accommodate magic and miracles and godly visitations. More likely, our inheritors will simply eat the paper remnants while thinking about other, more important things, like: wouldn’t it be nice if the planet wasn’t one giant desert?

What peculiar qualities of The Malazan Book of the Fallen should readers be aware of?

SE: I really haven’t the foggiest. It’s about people, mostly normal people, and it’s not necessarily told in a linear fashion, but everything fits together. Also, I believe in the cathartic value of tragedy – if my readers don’t, then they’re in for a rough ride.

Why should The Malazan Book of the Fallen be the next thing that everyone reads?

SE: When all ten books are done, they’ll look awesome on a book shelf. You know, it’s almost impossible for me to answer a question like that – I wish I could. I wish I could just lay out the sales pitch, but I can’t. My sales pitch is there, word by word and line by line in the books I write. I hope people buy in and I hope they enjoy the experience. When they do, I’m happy, and I write more, which is what I love doing – so, all I can promise is that I’ll keep to my side of the bargain and hold faith that my readers will reciprocate. Writing is a dialogue. When writers tilt noses up and say they write only for themselves, they’re full of rubbish. If it was true, they’d feel no need to get their work published; they could just stick it on the shelf and leave it there. We engage in a dialogue, with people most of whom we’ve never met – and if the story we tell does its job, we find in it common ground. And therein lies the reward for everyone involved.

Great job. You know Steven Erikson will be published in Romania soon, but I have his books in english already.

I've never read any of Steven Erikson's books. I'll have to pick these up. Thanks for the review. I realize that this is a series and that it should probably be read in order, but is there any one book in the series that is your favorite? Thanks!

hmm...the first book in the series is called Gardens of the Moon, but it isn't the best. If you don't mind starting in the middle and being a bit (more) lost, the second book, Deadhouse Gates is much better. But, favorite book of the series so far is the fifth - Midnight Tides which could also be read without the other since it largely deals with characters new to the series on a different continent from the previous books in the series. I ramble a bit about the series in this post.

Wow. You have no idea how much you're tempting me here. It looks like a fascinating series. I guess I've got my reward for making the LSAT. Thanks for the suggestions!

It's a good thing his books are better than his interviews.