Review: Riddle-Master by Patricia A. McKillip 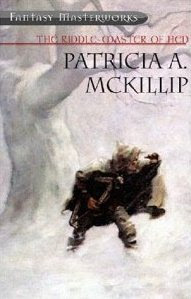 In the 1970s fantasy as a genre emerged primarily as secondary-world, epic fantasies largely based on Tolkien’s Middle-Earth, often embracing rich, poetic settings. In this context, Patricia A. McKillip wrote The Riddle-Master of Hed, the first book in the Riddle-Master trilogy. It was followed up with Heir of Sea and Fire and concluded with Harpist in the Wind – the full trilogy is reproduced in the Fantasy Masterworks edition and seems to go by the alernate titles of The Riddle-Master's Game or simply The Riddle-Master of Hed (Book Depository, Powell’s Books, Indiebound).

Riddle-Master tells the tale of Morgon of Hed, a former student of the College of Riddle-Masters, and the Prince and land-ruler of Hed. Morgon wins a centuries-old riddle contest with Pevan, the wraith of a long-dead king of another land, gaining a crown, learning of a betrothal and opening himself up to a destiny he had no prior knowledge of, one that he is reluctance to embrace. Morgon comes to learn powers buried within him as he seeks the distant High One to discover who he is, accompanied by the High One’s harpist, Deth, a man possibly even more mysterious than the High One.

The middle ‘book’ of the trilogy, Heir of Sea and Fire, shifts focus from Morgan to Raederle, the woman Morgan unwittingly becomes betrothed to upon winning Pevan’s riddle contest. Raederle’s experiences mirror Morgon’s in many ways as she searches for Morgon and struggles with her own in-born power. In Harpist in the Wind, the trilogy shifts back to Morgon, with Raederle at his side as they struggle to answer riddles about themselves, the High One, and his harpist.

Riddle-Master clearly shows the influence of Tolkien in form and style, yet distinguishes itself by not being as derivative as most 1970s Tolkienesque epic fantasies. The quest is internal rather than external in scope, answers are wrapped in riddles, and the secondary-world is relatively small and self-contained. As an early example of the modern form of an epic fantasy, Riddle-Master is actually quite fun. At times it feels absolutely predictable, but it surprises far more than perhaps it should. This is because many of the present tropes of epic fantasy simply hadn’t developed fully at the time McKillip wrote Riddle-Master. What feels like a standard trope evolves differently, if only because of the reader’s own preconceptions about tropes in epic fantasy. McKillip wasn’t subverting fantasy tropes – she was simply telling her story as she wanted and it’s only the evolution of the genre that has occurred since that makes it feel playfully subversive at times.

Perhaps the most distinctive aspect of Riddle-Master is McKillip’s writing style. She writes with a poetic, dream-like prose perfectly applied to a book of riddles. The text is subtle, meanings are layered, the pace leisurely in spite of the distance it carries, with it all leaving a faint sense of times long past.

A man he had never seen before, neither trader nor sailor, stood beside him. He was quietly dressed; the fine cloth and color of his blue-black tunic, the heavy chain of linked, stamped squares of silver on his breast were bewildering. His face was lean, fine-boned, neither young nor old; his hair was a loose cap of silver.
“Morgon of Hed?”
“Yes.”
“I am Deth, the High One’s harpist.”

While McKillip's writing is both beautiful and exceptional, it can be hard for the 21st Century mind to grasp. Like a dream, it doesn’t easily endure and I found myself unable to read Riddle-Master in large blocks. Also like a dream, the happenings of Riddle-Master tended to haunt my mind in a barely conscious way when I was not reading it, yet would easily fade away into something only barely remembered. I fear that many people will be unable to enjoy Riddle-Master for these reasons, while those that can embrace this style will be rewarded with a story with beauty residing in its telling.

Centering a full third of an epic fantasy trilogy on a female lead was much more significant in the 1970s than it is today. While I would hesitate to call Raederle a feminist character, she does break out of traditional roles, taking her fate into her own hands (even if it does still revolve around a man). It was probably a very bold move when originally published, in today’s context; it’s little more than a pleasant narrative shift.

In modern marketing speak Riddle-Master is often tagged as YA fiction. It is both easy to see why and somewhat surprising. Violence is muted, adult situations are chaste, language is clean, and the story is about relatively young adults (though not teenagers). However, the sometimes dense prose is often so subtle that it can become quite confusing. So, while Riddle-Master is decidedly PG-rated, the poetic, subtle style of its writing lends more to the mature mind, especially at a time of decreasing attention spans in the explosive, wired world of today.

What makes something a Fantasy Masterwork? Did the book challenge society in some way? Does it explore the human condition especially well? Did it originate some fundamental aspect of fantasy writing? Was it the first (or best) example of a new subgenre? Or was it simply a good book with easily obtainable publishing rights? I found myself asking these questions and more as I reflected upon my reading experience. Riddle-Master doesn’t re-invent genre and doesn’t blatantly challenge society. Riddle-Master is post-Tolkien, secondary-world epic fantasy that manages to be non-derivative. It’s a book of beautiful subtly and style, it’s dream-like and can be difficult to grasp, with the reward in the journey. It embraces an innate sense of past and dream, searches for itself, and lingers just beyond memory. Yes, it’s a Masterwork, and for the very reasons that it may fail to appeal to modern sensibilities.


RIDDLE-MASTER by Patricia A. McKillip was originally published as a trilogy beginning with THE RIDDLE-MASTER OF HED in 1976. HEIR OF SEA AND FIRE followed in 1977 and HARPIST IN THE WIND concluded the trilogy in 1979. The Fantasy Masterworks edition is titled RIDDLE-MASTER and is an omnibus containing the full trilogy in 640 pages, though the version reviewed here is an earlier omnibus edition.
Note: This review was originally posted at The SF & Fantasy Masterworks Reading Project.
Posted by Neth at 8/22/2010 06:00:00 AM