A Tale of More than Two Covers – Contemporary
For this installment of my semi-regular discussion series on cover art, I’m going to cover the more modern/contemporary style that is often used. Generally I like this style more than a traditional one – it just feels better to me. I suspect that my primary reason for liking contemporary covers more is the stigma that I feel is often attached to SFF books and my insecurities about it – or to put it much more simply – I’m often embarrassed to be seen reading a book with a silly looking traditional SFF cover. When I’m reading a book with a more contemporary cover design, these insecurities go away – in fact something of the opposite effect results, possibly due to a perceived or imagined feel of intelligence or coolness associated with such a contemporary book.

To be fair and honest, I’m exaggerating the above emotional responses significantly; however, they are there. It’s simple enough to say that traditional covers often evoke negative feelings of self consciousness while contemporary covers are more likely to evoke positive feelings.

So, after all that rambling, let’s get to a few covers. We’ll start with the main point of this post – a couple of examples of contemporary styled covers that I like a lot. 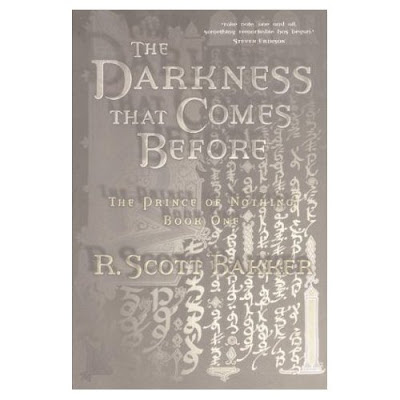 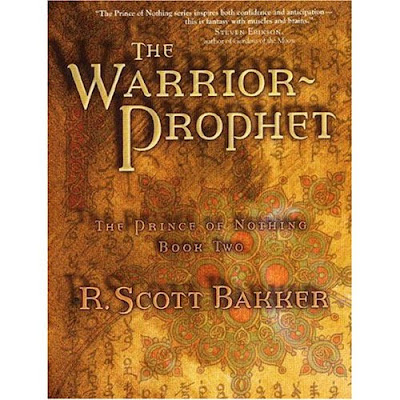 David Rankine is the cover artist for the hardback publication of R. Scott Bakker’s books in The Prince of Nothing trilogy. Above are the covers for The Darkness That Comes Before and The Warrior Prophet. Both covers are well done in my opinion, but The Warrior Prophet certainly stands apart as the better of the two. The scroll-like script gives the feel of something ancient with a strong hint of the east with the similarity to Arabic, Cyrillic, and Chinese/Japanese. The well-chosen font and other patterns further enhance the feel from the cover, matching perfectly with the feel of the words from the books. This is cover art that works. 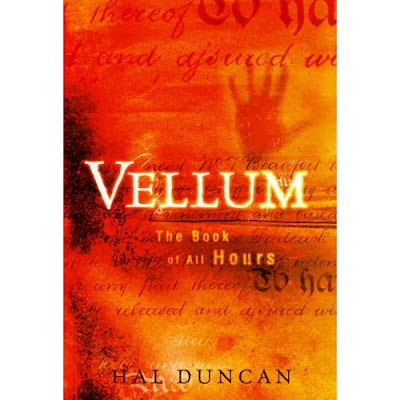 Chris Shamwana and Neil Lang created the above cover art for Vellum by Hal Duncan. While the initial glance at the cover is not as appealing as it is for The Warrior Prophet, the cover of Vellum does succeed, and the longer I look at it, the more strongly I believe it. The art is similar to that discussed above, especially with the use of script, but it soon becomes clear how much more is shown. The cover gives a sense of depth, of multiple levels within. The image of the hand and the use of red, orange, and black add a sense of unease, leaving a disturbing feeling – it’s hard to imagine a more appropriate cover for Vellum.

I had originally intended to leave this post as a discussion of only of the contemporary styled covers above, but fate would not allow it. The cover art by Todd Lockwood for the US release of The Bonehunters by Steven Erikson was released this week, and it screams for commentary. 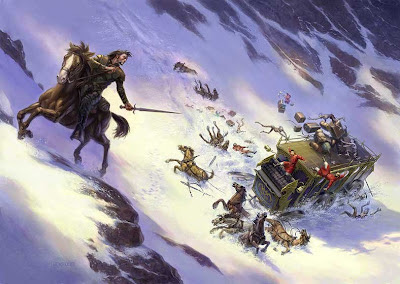 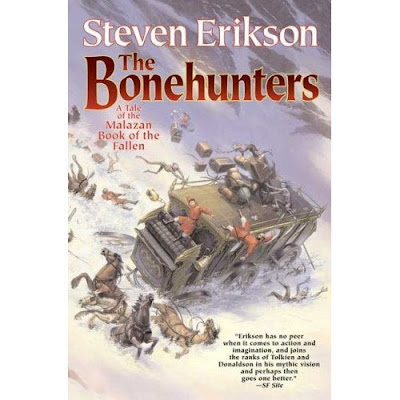 Once again, the art is done very well, as seen in the full jacket cover before any text is added. With the addition of the badly chosen font, the art suffers greatly. The cover looks more like a Western rather than SFF; however the real travesty is matching this cover to The Bonehunters. While this is a recognizable scene within the book, it’s a very poor choice for the cover as it fails to match the book and the Malazan world at all. Do things look magical? Otherworldly? Even Ominous? No, this looks like nothing more than a wrecked stage coach. It’s simply amazing to see Tor appear to blatantly sabotage any chance of success for Erikson’s books.
Posted by Neth at 4/20/2007 01:03:00 PM

Yeah, that Bonehunters cover is quite horrible in terms of selling the book.

I'd add one more thing to the list of Reasons Why Trad Cover Art Is Embarassing - it's usually not very nice to look at. They're dramatic, rarely subtle. It's getting better, all the time, but they're not exactly Michaelangelo.

I like the second book cover quite a bit, very well done. As is Vellum. Reminds me a little of the artwork of Dave McKean. I don't love the first cover very much but I have a feeling its one I'd like better if I actually saw it in person.

It is always interesting to see book art before they add the graphics. The Todd Lockwood painting is fine without the lettering. I'm not a big fan of that font anyway, and it really overshadows the art on the book. It also makes it worse if, as you say, it isn't very representative of the tale as a whole. Authors shouldn't have their books hamstrung by the cover art.

As you know, I am a fan of traditional cover art as well as contemporary. To me, if its well done its well done.

I'll resist my urge to give you a long therapy session to get over your book cover embarrassment! ;)

Glad you finally did another of these, I have been looking for one. I'd like to see some examples of more traditional fantasy/sci fi cover art that you actually like, if there is any. In particular I'm curious about your thoughts on the cover of the new Tolkien book.

To do a link use this bit of html

Anyway, subtly is definately lacking in many traditional covers. They can be done well, but it seems they are usually done badly.

I exaggerate my 'cover embarassment' a bit to get my point across, but only a bit - some of the traditional covers are truly embarassing.

I don't really know what I'll cover next - probably whatever I feel like at the time. I haven't really covered any sci-fi covers, so maybe I'll go in that direction. So far I've tried to keep at books that I've read, but maybe I'll branch out a judge a few books purely on their covers ;).

You didn't answer my Children of Hurin cover question...like it, or no?

I think the Children of Hurin cover is OK - I like the gray background and landscape, but I'm not too keen on the character in the center (Hurin?). The dress is a bit too Greek and obviously inspired by the movie - I can see how they are trying to tap into that audience, but I'd have preferred something more 'original' in appearence.

Shame about The Bonehunters cover, in and of itself it is a nicely crafted piece of art. I like Lockwood's art very much, but from the cover scene I expect the book to be filled with men brandishing six-shooters.

One can only hope - the US version of Deadhouse Gates is not bad at all - at least on par with the UK version if not better.

I think it needed to look like the movie stuff because Alan Lee did a majority of the designing of the look of the film AND was one of the two most well respected illustrators of the Tolkien books before the films were made. To do something more original would go against that look that Lee established with his earliest Tolkien work.

I think one of the problems I have with traditional fantasy coverart is that I don't mind dramatic art, but it often gets ruined by being put on a cover. I'd rather see it as color plates in the book, or a painting on the wall, than something crammed onto a MMPB cover with some ill-fitting text design on top.

Re: the US Malazan covers, I recently got Midnight Tides and was even less impressed (if that's even possible) by the cover font than I have been with the previous four books. There's no contrast between the font color and the background, making the title unreadable on a shelf. (And the art...well, it could be worse, I guess.) I kind of like the original painting for the US Bonehunters, but the way it's faded and then uglified with the title is one level of bad, and the second level of badness is that it's not going to sell any books, and the third and final level of badness is that when I look at it, I can't help but think of the punnish "Oh, so those are the fallen Malazans..."