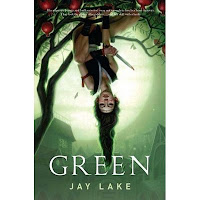 On the whole, I think that the cover art by Daniel Dos Santos for Green by Jay Lake (US, UK, Canada, Indiebound, review) is quite good. It’s the kind of cover art that would make me pick up the book to see what it’s about – and I think it’s something that would likely appeal to a wide-ranging audience (even though it still somewhat fails the ‘would I want people to see me reading this in public’ test).

Then, I read the book. The character featured on the cover is the main character of the novel, also named Green. Yes, she is an adolescent girl, yes she cuts her face beneath a pomegranate tree (though I don’t recall her hanging upside down). So it fits. Only in the book Green is a person of color. In the very least she has dark skin – I always pictured her with a South Asian appearance to match my perception of the country she was born in, but her descriptions in the book leaves her appearance pretty open aside from the consistent description of dark skin.

So, why is a cover that is otherwise a fairly good representation of the content of the book misleading about this small bit? I’ve seen Jay Lake mention on either Twitter or his blog that he likes the cover a lot – now is he just saying this because that’s what a good author does, or does this little inconstancy bother him. I think it would really bother me.

The assumption I jump to is that there is a perception that a person of color in the place of the nice white girl we have instead could reduce the sales of the book. True or not, that really rubs me the wrong way. If it is true, nothing is going to change until there are more people of color on covers (see Tobias Buckell’s Ragamuffin with cover art by Todd Lockwood). Or it could be that the cover artist didn’t know that Green was a person of color, which is entirely possible since he was likely given only a short excerpt to base the cover art on).

Knowing that, it would bug the hell out of me. Especially if I was the writer (and it's an otherwise great looking cover)

Does the book actually mention her skin tone or facial features? Or is this just your vague sense that a person like you think the protagonist is wouldn't look like the woman on the cover?

(Because you're coming awfully close to saying "no Asian would look like that," which has its own problems.)

I learned a long time ago that covers rarely reflect what's inside the book, and the characters rarely look like the descriptions in the book so it doesn't bother me.

If I was Jay I'd be totaly thrilled that I had such a wonderful cover and only be slightly disappointed by the fact that she doesn't have dark skin.

Andrew, that wasn't my intent at all and I hope it didn't come across that way. As I recall the descriptions, dark skin was mentioned regularly (and the contrasting white/pale skin of others) but not a lot of other features were described.

In my mind I pictured her as South Asian because later descriptions of a city in her homeland and the name of that city had what I felt were a distinctive Indian/South Asian feel to them.


After posting yesterday, I though I should have also mentioned the cover for Holly Phillips' Engine's Child - which is a great cover with non-Western (South Asian) feel to it.

I think you make a good point. (I've read the book and agree that Green seemed to be described as darker skinned than the person on the cover.)

I was struck by a different jarring thing that reveals other stuff about society, so to speak - at the time of this scene in the book, Green is a youngish girl, whereas the young woman hanging from the tree in the cover art looks a lot older (and seems a lot sexier looking) than the young girl described in the book. Which I took to be a combination of thinking that a child with cut cheeks would sell less, and that a hot adolescent chick would sell more than a child.

Well, Green was pubescent at this point in the book, which should put her around 12 or 13 - though in a society without lots of growth hormones in the food chain and her lifestyle, she could have been a year or two older. I don't think the girl on the cover looks that much older than 12 or 13, so I don't think it's quite as big a deal (and it didn't initially bother me like the race thing did).

I know that Ursula LeGuin was very irritated by the depiction of Ged as being white on her covers. And yes, it was deliberate because the publishers didn't think dark skin would sell. Kind of pathetic.

To me the cover-art version of Green looks more (East) Asian, or possibly Eurasian, than Caucasian, so I'm inclined to speculate that Dos Santos was just told to make her look "Asian," nobody bothered to specify "South Asian," and that was how he imagined her by default.

Even as an Asian reader myself, I can't get that upset about it, because cover art is notoriously inaccurate and it's a lovely picture regardless.

She never appeared caucasian to me. Her appearance on the cover definitely appeared of to resemble someone of asian decent. Perhaps her appearance doesn't match her description in the book, but I wouldn't go so far as to say they made her look caucasian as she does appear to clearly be of some sort of asian ancestry more than she appears white.

I suppose that we could debate just how Asian she appears, though I don't think that would gain anything (to me she still looks Caucasian, though I can see why others would say Asian).

Of course my main beef is that she is light-skinned rather than dark-skinned as described in the book. So, my main point still remains.

I feel the same about her skin tone, I feel like it should be darker and wonder why the publishers chose to make it lighter when many times in the book Green's skin is distinguished as being darker than that of the Petraean's - it is an important distinction at least to her that it is. On the cover, she looks like she's from East Asia since her skin tone is so light. In my mind I picture her more like she's from India.