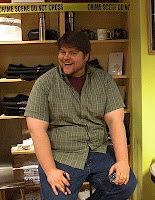 So last night I attended the book release party for debut author Sam Sykes at The Poisoned Pen bookstore in Scottsdale, Arizona. Sam’s book, Tome of the Undergates (Book Depository, Powell’s Books, Indiebound), was just released in the UK and will be released in the US in September – so only UK editions were on hand (and they were a bit pricey at that). Due to the party being pre-US release and since the big(gest) local SFF convention LepreCon is this week and will also have a book release party event on Friday, it was an event with only modest attendance – mostly friends and family. Of course this made me the outsider. 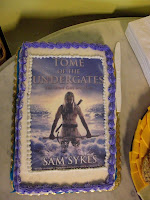 Anyway, it was a fun time and I got to meet Sam and hold conversations with him for a while. Books were signed. A face was signed. The signing of other body parts was discussed (and thankfully for all present not executed). And for all those curious about the real Sam behind the crass internet persona – well, I met his mother. And I have two words – ‘Mama’s Boy’. Yes folks, you heard it here first, Sam with all his on-line personality is a Mama’s Boy. Just look at the photo – yes that is the ‘Tome of the Undercake’. A proud mother indeed. But before your opinion of Sam is crushed too much, I did hear him swear in front of his mother – Sam Sykes does indeed swear. (If you’re confused at this point, Sam’s Twitter name is @SamSykesSwears.)

Sam is well on his way into Book 2 (no title was given). He said that he has a full draft that he is now fine-tuning. It hasn't been turned in to his editor yet, so it's still a ways off, but at this rate hopefully it'll be on target for a 2011 release.
What’s Sam doing tonight? Having dinner with George R.R. Martin. Being a young debut author has its perks.

He looks a lot nicer than he sounds, doesn't he?

It's funny - he has a rather quite, almost boy-ish voice. And he's still a bit shy/unconformtable talking in front of people (or maybe it was that he was talking in front of so many family and friends). I'm sure he'll get used it all and become the fun performer that so many authors are.

Pretty sure book two of The Aeon's Gate is called Black Halo. I think I wrung the provisional title of book three out of him in the interview I did a few months back, too.

Tome of the Undercake indeed. I'd eat it.

The cake was good, but for whatever reason it didn't leave the most pleasant taste in my mouth :P