My Wheel of Time Re-Listen: A Mea Culpa

So a couple of months ago I posted my reflections on listening to the audio version of The Eye of the World (Book Depository, Powell’s Books, Indiebound). Though my first listen, it is perhaps the 6th or 7th time that I’ve ‘read’ the book (maybe more, I really haven’t kept count). But it was my first re-read since I’ve started the blog and gotten into reviewing, something that has created quite a shift in the way I read and exposed me to an ever-widening variety of books. So it was a fun and revealing reflection. I of course promised that I’d keep doing it for each book as I continue in my re-read…err listen…in preparation for the release of Towers of Midnight (Book Depository, Powell’s Books, Indiebound) this fall (I may even make it). Well, life of course has happened.

I’ve been busy with work, even busier in my personal life, but neither nor both can be truly blamed. The simple truth is that I have been enjoying the re-read immensely and really haven’t wanted to spoil it by writing about it. It’s become my time in the truck when I get to listen to the books, a time that I’m happy to keep close. So, I’ve just started The Fires of Heaven (Book Depository, Powell’s Books, Indiebound), which leaves me with a number of posts to write. I apologize because it’s not going to happen. This is the post where I’ll throw out a bit about each book instead of writing a full post for each. 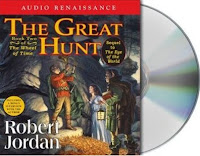 The Great Hunt (Book Depository, Powell’s Books, Indiebound). Upon reflection I have to admit that this book is a bit weaker than I remember. As with The Eye of the World there are a few confusing bits that just don’t make much sense. At best, they are inconsistencies. But I do love the broadening of the scope and some of the evolution of the characters. Unfortunately, Mat and Perrin are duds in this one – they react overly petty to Rand’s struggles and Mat still seems just like a rotten little child. But I did enjoy Rand’s subtle shifts and growths as he becomes a natural leader and begins to fit into the role. 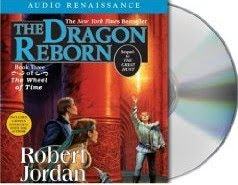 The Dragon Reborn (Book Depository, Powell’s Books, Indiebound). In the past I had always considered this my favorite volume in the series. I doubt that’s really true now. Some of the more annoying aspects of Jordan’s writing really start to drag out. First the repetition – the first 1/3 or so each book is just full of repeat introductions about characters and the world. This gets way old. And the amount of extra descriptions and fluff start to really show, even though they don’t get really bad for a few books yet. I love the descriptions and I generally love Jordan’s writing style, but I still wish it were tighter and that the series were a couple of books shorter.

In this book Mat comes alive through us finally getting to see things from his point of view. I’ve always loved his roguishness, his disdain for authority, and how he still can’t help but do the right thing and even be the hero no matter how reluctant he is about it and how much he denies it. Moiraine becomes more and more annoying to me. I continue to loose respect for her as a terrible and arrogant leader. Her desperation begins to come out, but really she just doesn’t get it and it continues to cause problems. This is probably the most surprising reaction I’ve had in this re-read. The Wonder Girls (Egwene, Elayne, and Nynaeve) all also get a bit more annoying as they take on the Aes Sedai attitude that respect for them is a given rather than something to be earned. This aspect of them really takes off in the following books. But, of the three, I still like Nynaeve the best, even though she is ridiculously stubborn and childish at times. Rand is largely absent and that’s just fine by me. And really people, Faile is not that bad. 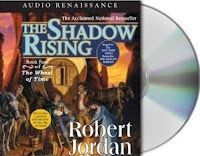 The Shadow Rising (Book Depository, Powell’s Books, Indiebound). The Shadow Rising is Perrin’s book, it’s as simple as that. Yes Mat continues to develop, but it’s not as drastic as either The Dragon Reborn or The Fires of Heaven. And Rand makes big changes towards being dark, arrogant, angry, and hard – he just isn’t very likeable anymore, and of course it only gets worse from here. But Perrin – this is what makes people like him. A simple man who becomes a lord. A blacksmith’s apprentice who leads an army of farmers against hordes of trollocs and myddraal. A man who is willing to sacrifice his own life for those he loves. A man who saves his people, falls in love, and gets the girl. I so wish I could pause his story-line now and not have to deal with the crap with Berelain and the whole bog-down in Ghealdan and Altara to come in future books.

Moiraine of course reaches new lows in this book, though she’s largely marginalized by Rand not listening to her. As I keep saying, I’ve been really surprised by just how little I like her in my re-listen. Arrogant incompetence best describes her even if she is completely desperate and does manage to help out Rand behind the scenes. Egwene continues to become more intolerable in her own arrogance. Such an adolescent child.

I’ve also become convinced that one of the questions that Rand asked the Aelfinn was something like ‘How can I learn to channel Saidin?’. Somehow, something or someone let him know that Lanfear and Asmodean were going to come at him in the Aiel Waste. It was hinted at far too much for him to not have forewarning – and that points to an answer received from the Aelfinn. Since he couldn’t ask about the Shadow directly and he desperately needed to learn of channeling, I think it makes sense that he asked them about it. Of course the question and answer that I’m speculating he got both touch on the Shadow, so that makes me wonder if there really are ‘dire consequences’ for questions that touch the Shadow, and if there are, just what were those consequences.

The scientist in me simply tries as hard as I can to ignore the issues with the Aiel Waste. It’s simply not a realistic landscape, but I can get past it.

Overall, I can see why The Shadow Rising gets pretty high marks in the series – especially with all the conflict with the Forsaken. They are still menacing foes of legend here. It’s only later that they start to become ‘worst bad guys ever’. 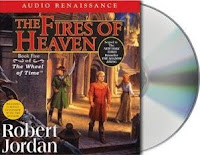 And really people, Faile is not that bad.

It's more that she came across to me as Perrin's Designated Girlfriend, inserted so that he'd have something to do, and after she appears It's All About Faile for most of Perrin's sections after that, culminating in that immensely irritating "Rescue Faile" Arc.

Perrin was much more interesting to me before he ran into his Designated Girlfriend, being the most level-headed of the three boys from the Two Rivers, and a view on Moiraine.

Sorry to double comment, but I wanted to add more -

The same thing happened to Mat when he started hanging out with Tuon. It felt less like some natural progression on his side and more like Jordan obviously pushing him to fall in love with her.

Tuon was actually more interesting than he was in much of Mat's later viewpoints, because it didn't come across the same way it did with Mat. Rather, she seemed to pick up some fondness and respect for him, but I'd question as to whether it actually amounts to "love".

I don't know, I feel like Perrin's Faile attachment and somewhat obsessive nature really starts after we find out what happens to his family. It is annoying, no doubt, but is it really surprising given what happened to his blood relations?

Yes Perrin's story line bogs down and gets rather boring after LOC. His obsession with Faile is at the heart of it. But I still don't see Faile as being all that bad. And I think Perrin's actions make sense from his point of view. I just wish that his story would have progressed much faster.

I re-read (and reviewed) these audiobooks last year in preparation for The Gathering Storm (which I have obtained but not actually read yet). The readers are terrific, but there were a lot of places (and nearly one whole book) where I skipped several chapters and read online summaries instead. I skipped almost all of Perrin and Faile because I kept falling asleep while driving.