LepreCon 36: Or How I Lost My Con-Virginity and Met George R.R. Martin

Arizona is not one of those places that has lots of SFF-fandom related events. There are a couple of small, local cons but that’s about it. Big-name guests are uncommon and there isn’t much depth to rosters of participants. But this year was a bit different. LepreCon 36 featured George R.R. Martin as its Author Guest of Honor. He alone was enough to get me interested but it helped that the depth of participants was a bit greater than usual with authors like Sam Sykes, Melinda Snodgrass, Emma Bull, Will Shetterly, Michael Stackpole, and James A. Owen.
As the title of the post indicates, I have not been to a con before, so this was quite an experience. In my world it seems that socially I’m always meeting and hanging out with people that are pretty much in my same socio-economic ‘class’ and have similar socio-political beliefs. In other words: it’s comfortable. This con experience got me out of that comfort zone. Yes I knew a couple of people, but none well. I had met a few members of the Brotherhood Without Banners before and I had met Sam Sykes only a few days earlier, but none could properly be called true friends. There were the folks wearing medieval garments and talking chainmail and historic reenactments. There was a huge presence of pirates (where are the ninjas when you need them) a good many aging Trekkies, and the most inept staff at the registration desk (surely Trekkies should at least be able to type). The variety of others ranged from looking like they just came out of their mother’s basement to everyday-looking folks. Anyway, spending the day and into the evening socializing with such a different crowd will certainly stick with me for a while and I definitely had a (mostly) fun time. And I met several people who knew who I was through the blog – that’s always an exciting and humbling experience. 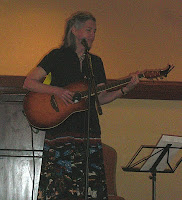 Unfortunately, events with the con that I wanted to attend were rather few in number. I attended a panel on pacing with Sam Sykes, Melinda Snodgrass and G. David Nordley. It was interesting and seemed to go well, though I don’t really have a baseline to compare it to. A bit after, Sam and I retired to the bar for a beer (thanks Sam!). We had a nice time largely spent gossiping about blogs, bloggers, publishers, etc. It was a fun conversation and I hope there will future gossip sessions over more beer. As we were approaching the end of our beer, George R.R. Martin came over and said hi. Sam introduced me and George was familiar with the blog (EXCELLENT!). A short conversation happened mostly about how surprised he was that the con was so small (only about 300 people) and then he moved on.

Sam left and then it was time for George to sign books. I had him sign all 9 that I had brought a long and chatted a bit more (there was no line). I was happy to see that he was freely telling people to come to the Brotherhood Without Banners party later that evening. I then went to see Emma Bull sing (she was Musical Guest of Honor rather than an author guest). It was fun. Later came George’s big panel where he was interviewed by a well prepared and well spoken host (I don’t know his name) and fielded questions from the audience – this went on for 2 hours. It was fun and informative – though as far as I could tell, nothing new was revealed. A Dance With Dragons (Book Depository, Powell’s, Indiebound) is ‘close’ to being done (as he has been saying for the past few months). I suppose a 2011 release is looking more and more likely, though I’d still not bet any real money on it. It sure sounds like George would love to have back that Afterword he wrote for A Feast For Crows (Book Depository, Powell’s, Indiebound).

Later that evening was the Brotherhood Without Boarders party (thanks again Watcher!). There was a keg, a decent assortment of hard alcohol and a beer wench to serve us – though he was a bit green and bosom-less. There were several other parties going on (those damn pirates) along the same hall, so much fun was had. George and Parris showed up a bit late (after their dinner) but immediately integrated. I had a few more fun conversations with George – he really is a very nice guy and very fan-friendly. Though I have to admit that his partner, Parris was the real hit (at least for me). She was very easy to talk with and such a pleasure. She spoke very enthusiastically about the HBO production (not revealing anything) and you can tell that both her and George absolutely love it. Alas, a bit after the scantily-clad, body-painted young women walked by I noticed it was way past my bedtime and said my goodbyes. I look forward to meeting both George and Parris again sometime (George of course said I should really consider going to a big convention like WorldCon – I just might).
Posted by Neth at 5/20/2010 04:24:00 PM

Good one Ken! How fortunate for you that there were such great participants.

And big congrats that you're so well known! Well and truly justified.

I too was surprised at JordanCon by how popular costuming is.

The WorldCon this year is in Melbourne in September. I've enrolled and have to get around to booking accommodation and flights. But in 2011 it will be in Reno, Nevada - not that far away from you. :)

hey man, it was a pleasure to meet you!

Are you in Az or did you just come for the convention?

ps. i missed the long interview on saturday because of napping to long!

thanks Linda. Have fun at WorldCon. I may do Reno, but it's hard to get away from the family.

@Raul - it was great meeting you too. I'm in AZ up in Flagstaff.

It sounds really fun. Cons are definitely a different experience but an experience that I highly recommend. They are almost always memorable.

I am going to Conquest next weekend with a friend who is a big George R.R. Martin fan because George always shows up to this one every year. Will be fun to meet him.

That is great Neth!

I experienced my first con at the WorldCon at Calgary in 2008. I had no idea what to expect but I had alot of fun. I did meet GRRM, but I was so shy that I mumbled something and he signed Clash of Kings for me. I did have a great chat with Tad Williams (one of my favorite authors) and Nathalie Mallet. I will always remember that!

was good to see you there, Ken! Just a quick note, I wanted to tell you that though it was good you came, this con was not anywhere near the caliber of what you'd see at the annual Worldcon. To put it another way, I wouldn't part with the $40 for a membership at this one, but have no problem spending $200 for the Worldcon one. I can't recommend it enough to you. If at all possible, you should try to make Reno.

I do want to make WorldCon in Reno - afterall, for the American west, it's quite close. We'll see - I'll have to balance family (at that time there will be a 1 yr old and a 4 yr old), vacation time, and spending $$. Unfortunately, I predict that that answer will be at this point in my life I just can't afford (in time and $$) to travel to something like that. But we'll see.

I have yet to make it to any of the Cons, and I'd love to go. And meeting George R.R. Martin, what a thrill.