Of Whisky and Books 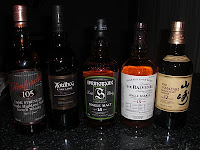 One of the things I look for when I decide to follow a blog or not is a personal touch. Yes, the majority of blogs I follow fall into the niche of SFF books, but reviews are not enough. I need a blog to have personality. One of the best ways for a blog to establish a personality is to post about things beyond the SFF world of an interest to the blogger. Admittedly, my own blog generally fails this test, though I try to establish personality through pretty much everything I write.

However, I’ve now decided – with the chiding of Mark Charan Newton – that I will branch out into the world of blogging about drinking – specifically scotch/whiskey/whisky and the occasional bourbon or other whisky variant. Sure if it takes off I may branch into some my other drinking habits – such as beer or wine, but for now I’ll sticking to whisky – mostly single-malt scotch whisky, though from time to time I will explore other versions of the water of life.

Now, I’m even less qualified to review whisky than I am books. Sure, I love the drink. And to me it fits well with things around here because after everyone else in the house has gone to bed I can usually be found relaxing on the couch with a book and nice glass of scotch. But I can’t see me being one of those reviewers who can list off 7 or 10 flavors that I taste in the whisky. No, I’ll be more basic – a few flavors and my overall ‘feel’ of it. Maybe I’ll even attempt to be clever or humorous about it. Though of course I’ve done research on how to do it ‘properly’. I suspect that I’ll actually take notes over the course of several occasions before I distill it all into a review.

I approve of the line-up of bottles there, particularly the Ardbeg!

Glad you caved in to my nagging. :)

The trick is to pair up the whisky with the book. For example, I'm thinking Bushmills Black Bush is great when paired with the Hobbit.

@John - I thought of that, but in the end I decided it wouldn't work and would probably just be too cheesy. My own tastes vary quite often, and frankly, a good scotch goes with any book.

ha! finally someone else who recognises the link between whisky and fantasy!